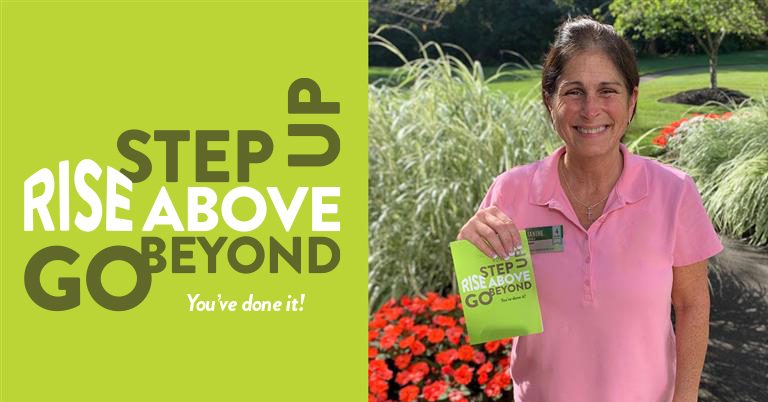 Recognizing employees who step up

COVID-19 has introduced unprecedented challenges to nearly every aspect of life. We’re proud of all the ways Team Atria has gone “Above and Beyond” to serve residents thoughtfully in 2020.
While residents and families sent letters, notes and emails expressing their thanks for staff members, from June to August, Atria employees nominated each other in a peer-to-peer program meant to recognize the team’s contributions. Known as the Above and Beyond awards, these accolades are presented to employees who lifted the spirits of residents and colleagues alike.

Here’s how the process works: staff members at each Atria community in the United States and Canada fill out nominations on behalf of their coworkers. Some of the workplace contributions that qualify employees for nomination include creating special moments in a resident’s day, maintaining a positive attitude and innovating resident activities.

After that, a volunteer committee of their peers reviews those nominations. In June, the committee received nearly 800; in July, that number rose to 1,400. Let’s meet a few of the winners.

Shavonna, an employee at Atria Tinton Falls in New Jersey, received the appreciation of a resident’s family for making sure the resident’s fridge was always stocked with her favorite beverage during quarantine.

At Atria La Jolla in San Diego, Engage Life Program Instructor Lily set up a distance-learning history class with a resident who survived the Holocaust. The students have remained in contact with the resident since then, first as pen pals and, later, as members of the resident’s 97th birthday party parade, arranged by Lily and also attended by the teacher and the resident’s family.

The Atria family is thankful for the recipients of the Above and Beyond awards as well as every staff member who works to ensure residents are safe during these times. We couldn’t be prouder of Team Atria.